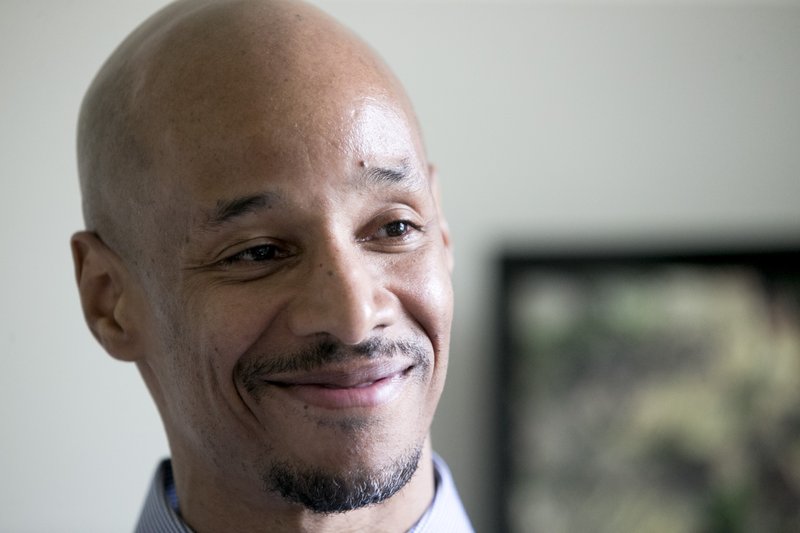 In this May 15, 2017 photo Patrick Pursley speaks in his apartment in Rockford, Ill. After being imprisoned nearly 24 years for the shooting death of Andy Ascher, Pursley has been absolved of the 1993 crime because the ballistics used to convict him proved to be wrong. Winnebago County Circuit Court Judge Joseph McGraw acquitted Pursley of the murder on Wednesday, Jan. 16, 2019. (Arturo Fernandez/Rockford Register Star via AP)

An Illinois judge acquitted a man of murder Wednesday, more than two decades after jurors convicted him by relying on ballistics that proved to be wrong.

Supporters of 53-year-old Patrick Pursley clapped in a Winnebago County courtroom when Judge Joseph McGraw issued his ruling, saying prosecutors had scant evidence to prove Pursley’s guilt in the fatal shooting of 22-year-old Andy Ascher during a robbery in Rockford, Illinois in 1993.

The ruling caps a decades-long journey Pursley undertook to prove his innocence after spending 23 years in prison. He represented himself from prison for years and lobbied Illinois lawmakers to pass a law allowing the ballistics in his case to be retested using technology not available when he was convicted. The Integrated Ballistic Identification System, or IBIS, uses much higher-resolution and multi-dimensional images for ballistics analysis and ultimately matches shell casings to guns.

“Basically the whole experience was numbing,” Pursley said after the verdict. “I was confident. All the signs were there that the judge would see the evidence for what it was. I’m just grateful that he did.”

So far, IBIS has been primarily used by law enforcement nationwide to catch and convict criminals, not to prove their innocence. That’s because Illinois remains the only state in the country that allows defendants in post-conviction appeals to use the system to retest ballistics.

Without the technology, matching bullets to firearms requires an expert to manually compare shell casings from a crime scene to shell casings test-fired from a gun using microscopes that, at the time of Pursley’s first trial, weren’t as strong as those available now. The processes for ballistics analysis used then were thought to be infallible but have since come under greater scientific scrutiny.

When the evidence in Pursley’s case was retested with IBIS, it showed that the scratches and dents on bullets and shell casings from the crime scene didn’t match the gun that prosecutors presented at trial as the murder weapon. In March 2017, McGraw ordered Pursley retried on a first-degree murder charge and allowed him to go free on bail.

Pursley opted to have McGraw decide his fate at his new trial instead of a jury.

“In this case, the court found that the evidence presented by the State at the retrial did not rise to the level of proof beyond a reasonable doubt,” Winnebago County State’s Attorney Marilyn Hite Ross said in a statement. “We respect the court’s decision.”

Prosecutors had maintained that Pursley killed Ascher while he sat in a car with his girlfriend. But the gun and shell casings were the only physical evidence prosecutors used to convict Pursley. Pursley’s girlfriend at the time of the killing implicated him in the crime but later recanted, saying her testimony had been coerced by police. Prosecutors also relied on testimony from a man who received a Crime Stoppers reward for telling police that Pursley had confessed to the crime.

“I really don’t have anything say,” said Ascher’s mother, Lois Ascher, in a phone call. “But thank you anyway.”

The centerpiece of the prosecution’s case was the conclusion from their ballistics expert who testified with absolute certainty during the 1994 trial that the bullets that killed Ascher could only have come from the gun authorities connected to Pursley. Although his confidence in the language he used then has waned, he still insisted during the latest trial that his initial findings were correct.

But defense attorneys had two experts who independently concluded that the gun taken from Pursley’s home and presented as evidence was not the firearm used to kill Ascher.

“To get to this place it took a tremendous amount of time, work, and commitment that started with Patrick,” said Andrew Vail, one of the attorneys from Chicago-based Jenner and Block, which represented Pursley for free, along with Northwestern University’s Center on Wrongful Convictions.