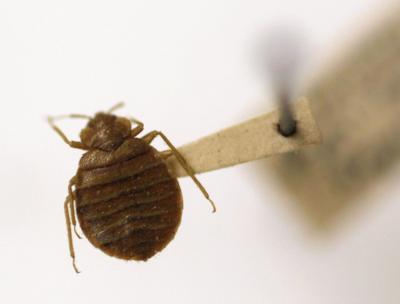 WASHINGTON TOWNSHIP, Erie County — Forensic science and store surveillance video are being used in an effort to determine who released bed bugs at the Edinboro area Walmart store.

Last week, bed bugs were discovered in the clothing department of the Walmart at 108 Washington Towne Boulevard, just outside of Edinboro in Washington Township, Erie County.

While bed bugs don't spread disease, their bites may cause itching and loss of sleep because they feed solely on the blood of people and animals while they sleep, according to information on the federal Centers for Disease Control’s website.

A bottle containing several dead bed bugs that was found Saturday lying on the floor of the men's department was turned over to the Pennsylvania State Police Forensic Service Unit for possible fingerprints, Trooper Cindy Schick, spokeswoman for Troop E headquarters, said Monday.

"Walmart reached out to other stores in the area and verified this has been an isolated incident," Schick said Monday.

Ecolab Inc. of Erie, a pest control company, was contacted and responded to the store on Friday. The Ecolab representative found bugs crawling around in the men's fitting room and confirmed they were bed bugs.

The bottle taken into evidence by police on Saturday afternoon had been found earlier that day by an employee in the men's department near the belts, Schick said.

After the second bottle was found on Saturday, Walmart management called state police at Girard to report the entire incident, Schick said.

A Walmart spokeswoman told the Tribune on Monday there's no infestation and that the Walmart location is cooperating with authorities.

"Our third-party pest management service has visited the store, and after conducting a thorough review found no evidence of an infestation," Tara Aston, a senior manager for Walmart's corporate communications, told the Tribune via email Monday.

"We believe this to be an isolated incident and are taking all the necessary steps to help ensure a safe environment for customers and associates," Aston said. "We will continue working with law enforcement as they conduct their investigation."

It make take several weeks or even a couple of months for evidence to be processed by state police, but the investigation continues, Schick said.