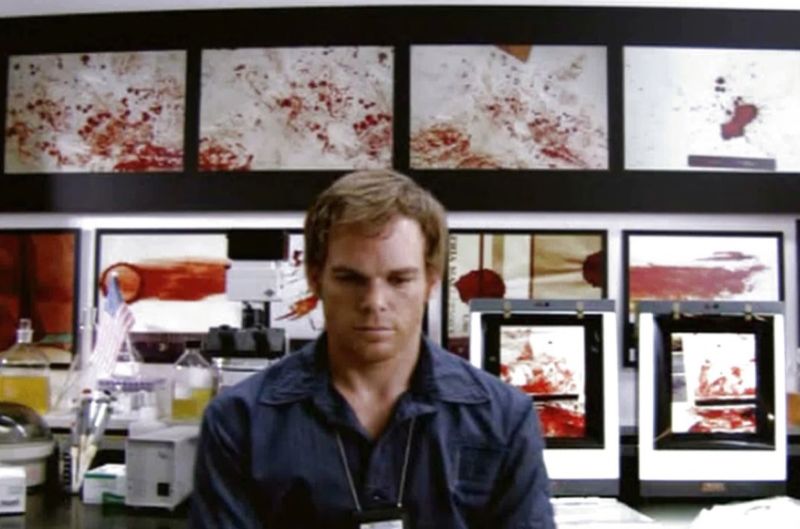 Physicists continue to contribute their unique insight into the forensic analysis of blood spatter patterns with two recent papers. The first, published in Physics of Fluids, offers a useful mathematical model of the relationship between the shape and speed of a bullet and the patterns produced by the resulting blood spatter. The second, published in the Journal of Fluid Mechanics, examines how gases propelled from a gun muzzle at firing can affect the distribution of blood spatter and gunshot residue (GSR).

The latter work in particular may have important implications for the famous Phil Spector murder case. The music producer was ultimately convicted in 2009 of shooting 40-year-old Lana Clarkson back in 2003. But his first trial, in 2007, ended with a hung jury in part because the forensic experts called by the prosecution and defense couldn't agree on how to interpret the blood spatter patterns on the clothing worn by Spector and Clarkson. Physics may help shed light on whether he was truly guilty or innocent.

Analysts at a bloody crime scene typically look for patterns relating to the size, shape, location, and distribution of blood stains. They interpret those patterns and use the data to reconstruct what happened as best they can. For example, it's possible to measure the direction and angle of blood stains to determine point of origin. Fans of the Showtime series Dexter—whose fictional central character was a serial killer/forensic technician with expertise in blood-stain analysis—may recall that this is often done with string, making it easier to trace the trajectory of individual drops.

That said, there is still a great deal of uncertainty and subjectivity involved when it comes to blood spatter analysis, per a 2009 report on forensic science by the National Academy of Sciences. Blood is a surprisingly complicated fluid, in part because the red blood cells in human blood can form long chains, giving it the consistency of sludge. And blood starts to coagulate immediately once it leaves the body. Technically, blood is a non-Newtonian fluid: apply more force and the viscosity decreases rather than staying constant (as Newtonian fluids do), causing it to flow faster. Blood is also viscoelastic: not only does it deform slowly when exposed to an external force, but once that force has been removed, it will return to its original configuration. Add in coagulation and a host of other factors (including the type of surface on which it lands), and correctly interpreting the resulting spatter patterns becomes incredibly difficult. 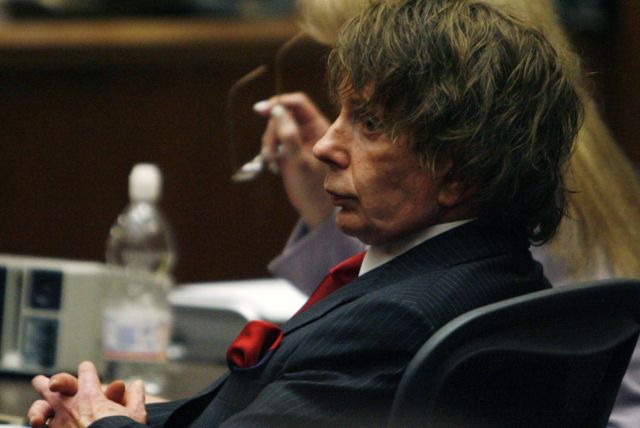 Music producer Phil Spector after the judge declared a mistrial due to a hung jury during his murder trial at the Los Angeles Superior Court September 26, 2007. Fred Prouser-Pool/Getty Images

Spatter from gunshot wounds is especially difficult to interpret. The force of the bullet can overcome any surface tension, and because blood is denser than air—and is accelerated toward air—it breaks into smaller drops to form a cloud spraying out from the wound. This process is called atomization and is not well understood in terms of the underlying physical mechanism. The blood droplets typically travel over longer distances and follow a curved trajectory thanks to gravity and air drag.

Blood droplets also interact with each other as they travel through the air, further increasing their travel distance, much like birds flying in a V formation. There is also a distinction between forward blood spatter—which travels in the same direction as the bullet motion—and backward spatter in the direction against the bullet motion. That's according to Alexander Yarin, a physicist at the University of Illinois, Chicago, who specializes in fluid dynamics and is a co-author on both recent papers.

Yarin and several colleagues—including Daniel Attinger, a mechanical engineer at Iowa State University—have spent the last several years doing experiments in the lab and developing quantitative theoretical models to better predict the behavior of blood spatter from gunshots in particular. Many of those experiments involved shooting bullets through sponges soaked in pig's blood, spraying the liquid onto white paper, and capturing the entire process with high-speed cameras. Then the scientists analyzed the spatter patterns, comparing their experimental results with their theoretical predictions of how many drops were produced, along with their sizes, distribution, and initial velocities.

In 2016, they published a model that could better account for the effects of gravity and drag from gunshot backward spatter, offering the first prediction of the atomization mechanism, as well as determining how far drops of blood from a gunshot wound could travel. The ultimate goal is to use these mathematical models to produce a chart of blood spatter patterns that forensic analysts can use in the field. Perhaps one day, there will even be an app capable of scanning said spatter at a crime scene and analyzing it to produce a likely scenario, including the type of gun and bullets used (if bullets are not found at the scene), and where each person involved (whether shooters or victims) was standing.

The current research builds on Yarin's earlier work with Attinger and others. For instance, a paper published earlier this year in Forensic Science International looked at backward spatter from various gunshot scenarios involving rifles and handguns, with different types of ammunition. Yarin et al. developed a model to describe the effects of specific types of bullets on forward and backward spatter: slender and blunt bullets and egg-shaped bullets. Now they have come up with a more generalized model for forward spatter that is applicable to any kind of bullet, described in the Physics of Fluids paper. They also identified the physical mechanism responsible for the formation of blood droplets. The technical term is "the Rayleigh-Taylor instability." It's what happens when a dense liquid, like blood, is accelerating toward a lighter fluid, like air. "A bullet produces acceleration of blood towards air, and that's how atomization begins," said Yarin. 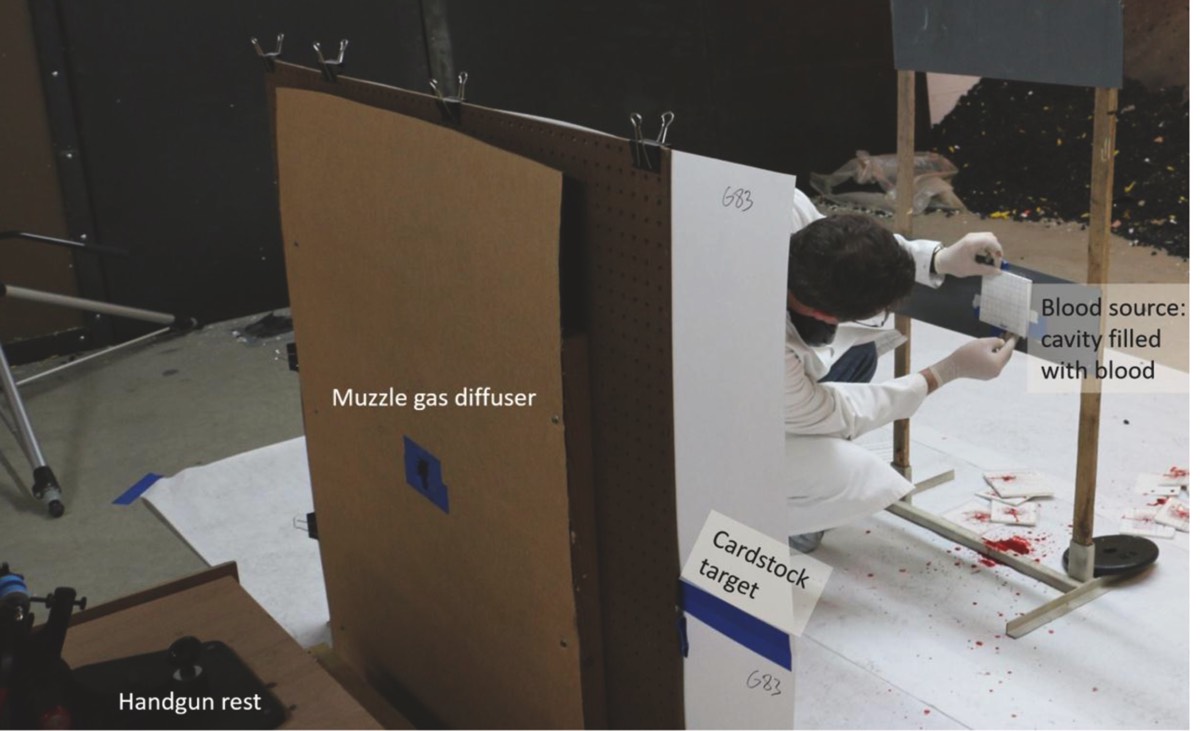 Preparation of a vertical backspatter from a handgun, using a cavity filled with blood and the muzzle gas diffuser. Attinger et al./Forensic Science International

The experimental geometry used to generate spatters on a vertical cardstock target (a) and on a horizontal one (b). Attinger et al./Forensic Science International 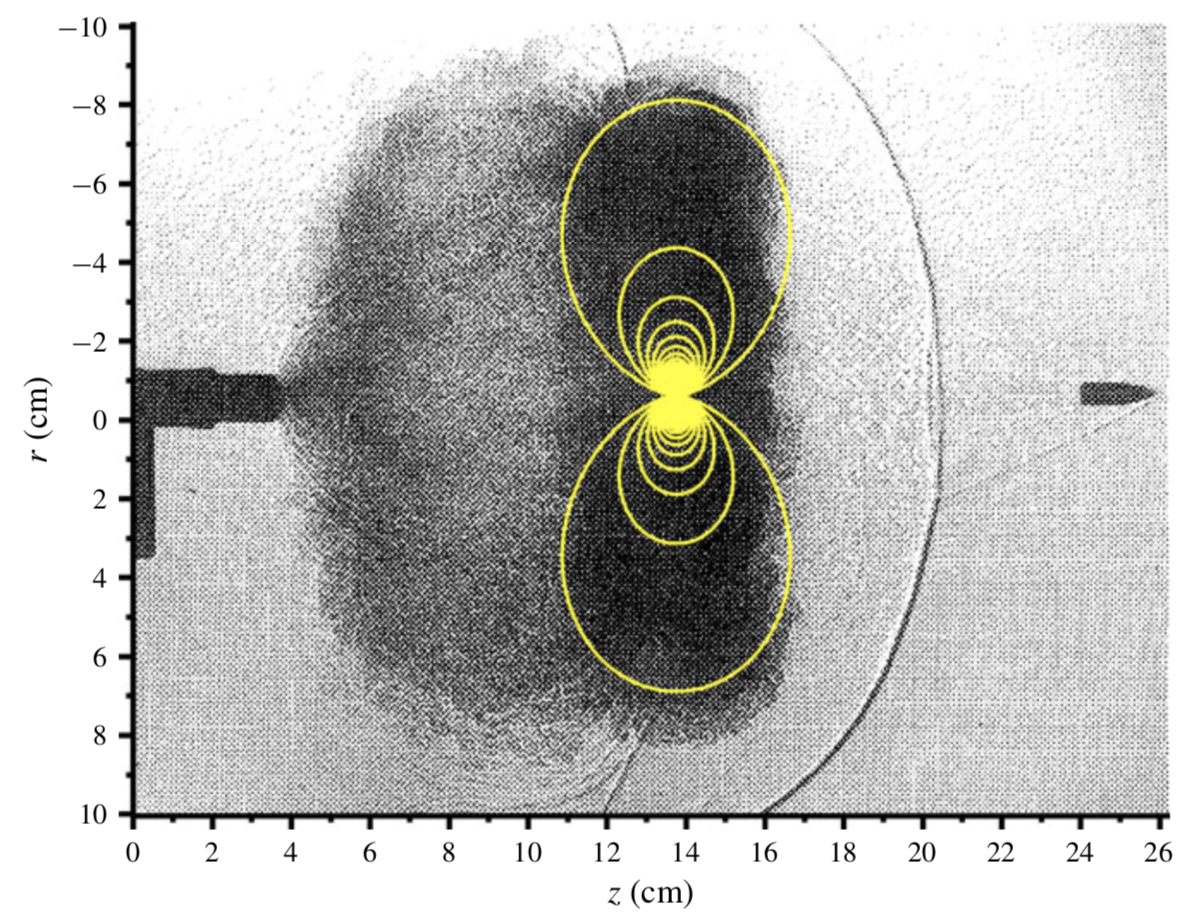 Diagram of the theoretically predicted flow pattern in the turbulent vortex ring after a bullet leaves the gun muzzle. Cominskey and Yarin/J. Fluid Mech.

Another complicating factor is how blood droplets in backward scatter are affected by the gas that escapes the muzzle of a gun as it is fired. A better model for how propellant gas propagates after leaving the muzzle could help identify how far a shooter was from the target at a crime scene, as well as shed light on its role in the transport of gunshot residue (GSR). That's the focus of the Journal of Fluid Mechanics paper, which Yarin co-authored with his University of Illinois graduate student Patrick Comiskey.

They specifically examined the effect of the turbulent vortex gas rings produced by a gun muzzle after a gun shot, and they found that the effect can be significant on the resulting backward blood spatter patterns. "Turbulent vortex rings of propellant gases skew the distribution of bloodstains [in backward spatter] on the ground and can either propel blood droplets further from the target, or even turn them backwards toward the target," the authors wrote.

This could be significant for the Spector case. The prosecution's expert witness believed the spatter would only travel two to three feet; the defense's expert witness thought it could travel as far as six feet. This was critical to the case because Spector claimed he was too far away from Clarkson to have shot her, insisting she shot herself in the mouth. There was quite a bit of blood spatter on Clarkson's dress and 18 tiny drops of blood on Spector's jacket. But nothing got on his trousers or jacket cuffs. The defense argued that if he had shot Clarkson, his clothing would have been covered in backward blood spatter. Yarin and Comiskey's analysis demonstrates that it is possible for blood spatter to travel longer distances, to surpass a shooter, and to turn back toward the target. So Spector's jacket could remain pristine while blood droplets either passed by him or turned back toward the victim, even if he was the shooter.

Spector is currently serving 19 years to life, but there has been a lingering cloud of uncertainty hanging over the question of his guilt or innocence. "His case is exactly the backward spatter toward the shooter," said Yarin. A 2013 HBO film, Phil Spector, written and directed by David Mamet, included a scene depicting a fictionalized forensic experiment strongly hinting at the music producer's innocence.

"This latest analysis sheds some physics-grounded doubt on that scenario," Yarin said.