When a DNA Test Says Youâre a Younger Man, Who Lives 5,000 Miles Away

After a bone marrow transplant, a man with leukemia found that his donor’s DNA traveled to unexpected parts of his body. A crime lab is now studying the case. 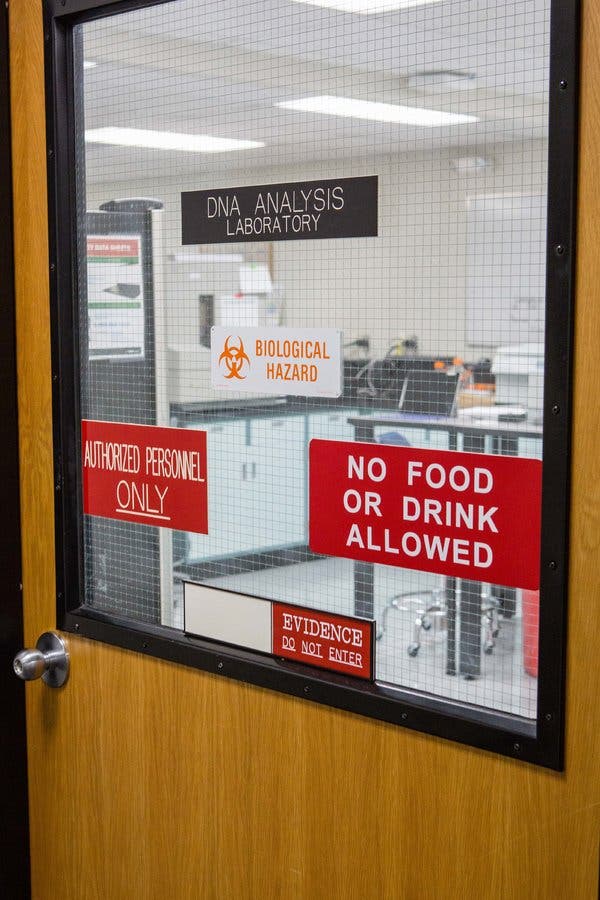 The DNA analysis laboratory at the Washoe County Sheriff’s Office in Reno, Nev.Credit...Tiffany Brown Anderson for The New York Times

Three months after his bone marrow transplant, Chris Long of Reno, Nev., learned that the DNA in his blood had changed. It had all been replaced by the DNA of his donor, a German man he had exchanged just a handful of messages with.

He’d been encouraged to test his blood by a colleague at the Sheriff’s Office, where he worked. She had an inkling this might happen. It’s the goal of the procedure, after all: Weak blood is replaced by healthy blood, and with it, the DNA it contains.

But four years after his lifesaving procedure, it was not only Mr. Long’s blood that was affected. Swabs of his lips and cheeks contained his DNA — but also that of his donor. Even more surprising to Mr. Long and other colleagues at the crime lab, all of the DNA in his semen belonged to his donor. “I thought that it was pretty incredible that I can disappear and someone else can appear,” he said.

[After this story was published, curious readers asked a number of questions. We did our best to answer them.]

Mr. Long had become a chimera, the technical term for the rare person with two sets of DNA. The word takes its name from a fire-breathing creature in Greek mythology composed of lion, goat and serpent parts. Doctors and forensic scientists have long known that certain medical procedures turn people into chimeras, but where exactly a donor’s DNA shows up — beyond blood — has rarely been studied with criminal applications in mind.

Tens of thousands of people get bone marrow transplants every year, for blood cancers and other blood diseases including leukemia, lymphoma and sickle cell anemia. Though it’s unlikely that any of them would end up as the perpetrator or victim of a crime, the idea that they could intrigued Mr. Long’s colleagues at the Washoe County Sheriff’s Department, who have been using their (totally innocent) colleague in IT as a bit of a human guinea pig. 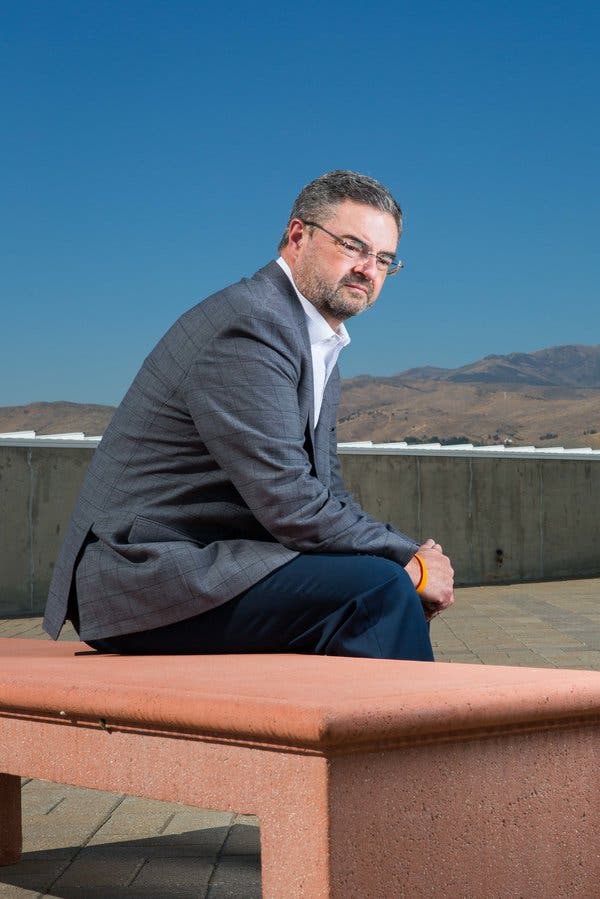 Chris Long agreed to serve as a guinea pig for his colleagues’ experiment to help them understand how a bone marrow transplant could confuse a criminal investigation.  Credit...Tiffany Brown Anderson for The New York Times

Where will the DNA go?

The implications of Mr. Long’s case, which was presented at an international forensic science conference in September, have now captured the interest of DNA analysts far beyond Nevada.

The average doctor does not need to know where a donor’s DNA will present itself within a patient. That’s because this type of chimerism is not likely to be harmful. Nor should it change a person. “Their brain and their personality should remain the same,” said Andrew Rezvani, the medical director of the inpatient Blood & Marrow Transplant Unit at Stanford University Medical Center.

He added that patients also sometimes ask him what it means for a man to have a woman’s chromosomes in their bloodstream or vice versa. “It doesn’t matter,” he said.

But for a forensic scientist, it’s a different story. The assumption among criminal investigators as they gather DNA evidence from a crime scene is that each victim and each perpetrator leaves behind a single identifying code — not two, including that of a fellow who is 10 years younger and lives thousands of miles away. And so Renee Romero, who ran the crime lab at the Washoe County Sheriff’s Office, saw an opportunity when her friend and colleague told her that his doctor had found a suitable match on a donor website and he would be undergoing a bone marrow transplant.

“We need to swab the heck out of you before you have this procedure to see how this DNA takes over your body,” she recalled telling him.

Mr. Long agreed. He welcomed an intriguing distraction from his diagnosis of acute myeloid leukemia and myelodysplastic syndromes, both of whichimpair the production ofhealthy blood cells. 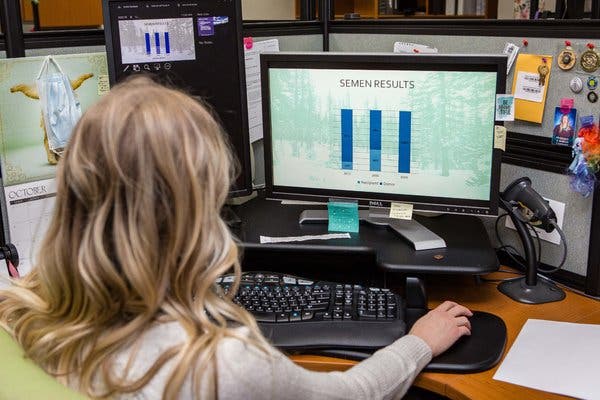 Four years later, with Mr. Long in remission and back at work, Ms. Romero’s experiment persisted, aided by her crime lab colleagues. Within four months of the procedure, Mr. Long’s blood had been replaced by his donor’s blood. Swabs collected from his lip, cheek and tongue showed that these also contained his donor’s DNA, with the percentages rising and falling over the years. Of the samples collected, only his chest and head hair were unaffected. The most unexpected part was that four years after the procedure, the DNA in his semen had been entirely replaced by his donor’s.

“We were kind of shocked that Chris was no longer present at all,” said Darby Stienmetz, a criminalist at the Washoe County Sheriff’s Office.

If another patient responded similarly to a transplant and that person went on to commit a crime, it could mislead investigators, said Brittney Chilton, a criminalist at the Sheriff’s Office forensic science division.

And it has misled them, Ms. Chilton learned once she began to research chimerism. In 2004, investigators in Alaska uploaded a DNA profile extracted from semen to a criminal DNA database. It matched a potential suspect. But there was a problem: The man had been in prison at the time of the assault. It turned out that he had received a bone marrow transplant. The donor, his brother, was eventually convicted.

Abirami Chidambaram, who presented the Alaska case in 2005, when she worked for the Alaska State Scientific Crime Detection Laboratory in Anchorage, said she had heard about another disconcerting scenario since then. It involved police investigators who were skeptical of a sexual assault victim’s account because she said there had been one attacker, though DNA analysis showed two. Eventually the police determined that the second profile had come from her bone marrow donor.

Similar scenarios could also create confusion around a victim’s identity — and in fact it has, said Yongbin Eom, a visiting research scholar at the University of North Texas Center for Human Identification. In 2008, he was trying to identify the victim of a traffic accident for the National Forensic Service in Seoul, South Korea. Blood showed that the individual was female. But the body appeared to be male, which was confirmed by DNA in a kidney, but not in the spleen or the lung, which contained male and female DNA. Eventually, he figured out that the victim had received a bone marrow transplant from his daughter. 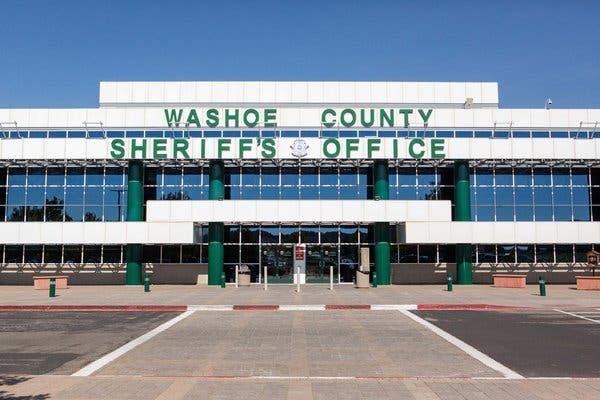 The Washoe County Sheriff’s Office in Reno, Nev., ran an informal experiment that could have broader criminal implications.  Credit...Tiffany Brown Anderson for The New York Times

The specifics of Mr. Long’s situation raise an inevitable question: What happens if he has a baby? Would he pass on the genes of his German donor or his own to future offspring? In this case, the answer will remain untested because Mr. Long had a vasectomy after his second child was born.

But what about everyone else? Three bone marrow transplant experts who were surveyed agreed that it was an intriguing question. They also agreed that passing on someone else’s genes as a result of a transplant like Mr. Long’s was impossible.

“There shouldn’t be any way for someone to father someone else’s child,” said Dr. Rezvani, the Stanford medical director.

That’s not to say that other forms of chimerism haven’t created comparably confusing scenarios. Fraternal twins sometimes acquire each other’s DNA in the womb; in at least one case that led to unfounded fears of infidelity when a man’s child did not seem to be his. In another case, a mother nearly lost custody of her children after a DNA test.

But a donor’s blood cells should not be able to create new sperm cells, Dr. Rezvani said. Dr. Mehrdad Abedi, the doctor at the University of California, Davis, who treated Mr. Long, agreed: He believed it was Mr. Long’s vasectomy that explained how his semen came to contain his donor’s DNA. The forensic scientists involved say they plan to investigate further.

Everyone who has reviewed Mr. Long’s case agrees on one thing: He is a living, breathing case study of one, and it’s impossible to say how many other people respond to bone marrow transplants the same way he did. It’s simply one of those curious possibilities that forensic analysts may want to consider when DNA results are not adding up.

For his part, Mr. Long said he hopes to meet his donor during an upcoming trip to Germany and to thank him in person for saving his life.